Driven by a love for creating conscious events that impact people, grow communities, and support the culinary arts, PASK Productions believes in giving back in creative and inspiring ways. With roots in the Tampa area, PASK Productions is committed to helping grow a city that has provided so much to the team’s development.

Alyse Pask, owner and founder of PASK Productions, has deep roots in the Tampa community. Her grandfather, Manuel Alonso, owned one of the first drugstores in West Tampa and had a strong passion for helping others. Alonso had a reputation for bringing people together to strengthen the community and this is the legacy that Pask hopes to continue.

Manuel Alonso came from strong Spanish and Cuban roots (his father from Asturias, Spain and mother from Havana, Cuba. Prior to becoming the owner of Alonso Drugs in West Tampa, Manuel had various occupations growing up; working at his father s grocery store in West Tampa and then as a selector at a cigar factory, an occupation shared by this mother as well.

Eventually he opened one of the first independently- owned sundry stores, Alonso Sundries and eventually the legend that would come to be known as Alonso Drugs, not only a business but also a tradition, and gathering place giving West Tampa a sense of community when life was much simpler and people seemed to care—a time where time stood still. At least a couple of times a day you could smell the aroma of fresh brewed Cuban Coffee which he shared daily with friends and business associates at his marble top round table at the store.

There too originated a Tampa Bay Civic Club which was instrumental in helping those less fortunate paint and repair their houses, and giving them free medications when they could not afford it. This same club which grew quickly in numbers was often most influential in local elections as politicians would come by for Alonso’s blessing and support.

It was truly a sad day in 1985 when Alonso Drugs closed its doors for good after the death of its owner, Manuel Alonso, a legend in his own. 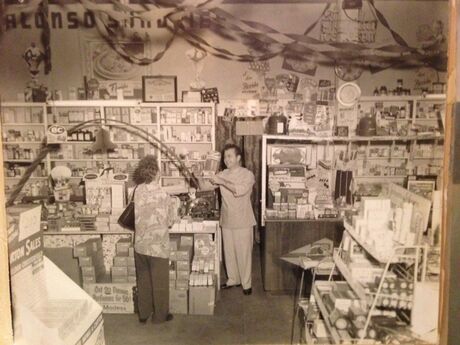 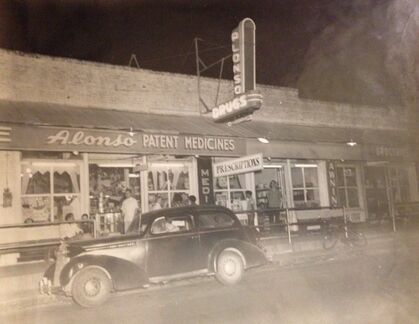 Emilia Kalogiannis, We Are Socially